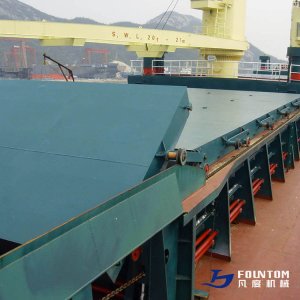 Cargo Hatch covers of ships are designed to be efficient and cost effective, as an initial investment and during service, and at the same time should suit the demands of the various types of cargo vessels. The major objective of hatch covers and coaming on ships is to prevent the ingress of water into the cargo hold and protect the goods from being damped and damaged.

The various types or hatch covers that are mainly used on board are as follows- Lifting type; Rolling type; Folding type. Lifting type or lift away type hatch covers are generally used on container ships, whereas rolling type are used on bulk carriers (to be specific side-rolling). Rolling type can be divided into end rolling, side rolling, and piggy back & telescopic. Folding type hatch covers are basically used on general cargo ships. However, these may vary depending on the stowage space and the type of cargo that is carried.

Rolling type hatch covers consists of two covers at the end of the hatchway. Wheels are fitted which help in the sliding of the panel either athwartship in case of side rolling or longitudinally in case of end rolling. These type of hatch covers are usually fitted on large ships. Hydraulic rams are required to raise them to rolling position as they are extremely heavy and have very large dimensions.

Lift away type hatch covers can be classified into two types

Single panel cover consists of a single cover for each opening, these can be seen mainly on bulk carriers. In case of multi panel covers, a single hold is covered via multiple number of covers, these are most commonly observed in cellular container ships in the case of longitudinal joints, and for multipurpose cargo ship in case of transverse joints. 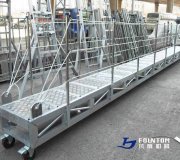 Marine ladders are made by stainless steel, aluminum or... 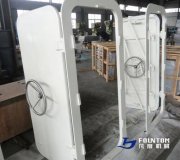 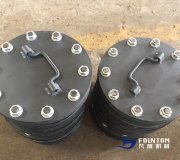 Deck hatch in a wall or deck at window height on ships.